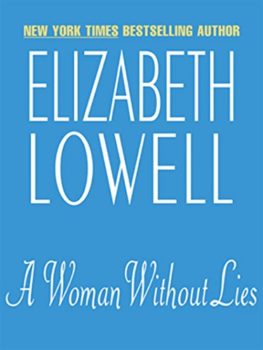 A Woman Without Lies

A Woman Without Lies
by Elizabeth Lowell

An artist in glass and light, Angel has loved with passion and fire ---and learned the true depths of sadness when what she loved was taken from her. When she first meets Miles Hawkins ---a solitary, distant man ---their mutual mistrust seems insurmountable. Hawk has never known what Angel has freely enjoyed, having experienced only cruelty and betrayal from the women in his life. But Angel is willing to risk everything that proud, silent Hawk cannot, as she strives to bring truth and love to a tormented soul who believes in neither. Yet giving her heart again could be a gamble with stakes too high and too painful for her to endure ---for she fears that, by loving Hawk, she will surely lose him.