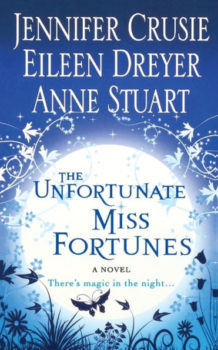 You're invited to spend the weekend with three extraordinary sisters...

When she was sixteen, Dee Fortune kidnapped her two younger sisters and ran from danger. Now twenty-nine, she's still trying to control her shape-shifting power—no easy task when Danny James shows up one Friday morning with his deadly smile and dangerous questions about the past.

Lizzie is determined to save her family from financial ruin by turning straw into gold; now if she could only stop turning forks into bunnies. Then Elric, a sorcerer, appears one Friday—annoyed with the chaos Lizzie is creating in the universe and in his heart. . . .

The youngest Miss Fortune, Mare, towers above her sisters but her telekinetic power is dwarfed by their gifts. She spends her days at Value Video!! and her nights contemplating the futility of her existence. But then a gorgeous Value Video!! VP and Mare's long lost love turn up. . .and they all turn up the heat on a weekend that no Fortune will soon forget!