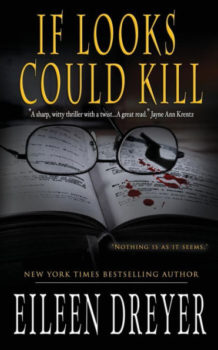 If Looks Could Kill

If Looks Could Kill
by Eileen Dreyer

A wildly popular author of suspense novels, Chris hides away in the tiny town of Pyrite, Missouri, where she lives in a converted storefront and practices breaking-and-entering on local businesses.

Most of the citizens of Pyrite happily claim Chris as their very own celebrity. But the new police chief, Al MacNamara isn’t one of them. Recently transplanted from the mean streets of Chicago, Mac hates mysteries. And Chris Jackson is a mystery.

Then, the murders begin. Murders that look suspiciously like those in Chris’s books. Murders that escalate to a grisly stabbing that exactly mimicks a story no one has read except Chris, herself.

With MacNamara’s help, Chris is forced to delve into the dark recesses of her past for answers. Is a madman stalking Chris? Or is Chris right to question her own sanity? Could she be committing the murders herself?

Originally published September 1992 in mass market paperback by HarperTorch and Septemer 2012 in eBook by ePublishing Works!.