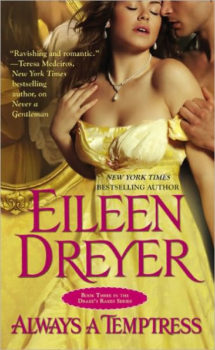 Always a Temptress
by Eileen Dreyer

His greatest battle is just beginning . . .

Captain Harry Lidge has done his duty. After losing too many good men on the battlefield, he’s ready to put his responsibilities behind him and live a life free of care. But first he has one last mission: find out what the most outrageous woman in London, the same woman who betrayed him nearly a decade earlier, is concealing, before her secrets take down the crown.

Surrounded by ardent admirers and a few loyal friends, Lady Kate Seaton glides through the ton on a confection of couture gowns and bon mots. No one suspects that beneath her lighthearted façade Kate hides a sorrow so scandalous she’ll do anything to keep it hidden. But only when she trusts Harry with the truth and only when he trusts her with his heart can they stop the villains all too willing to kill Kate to attain their ultimate goal: destroy England.