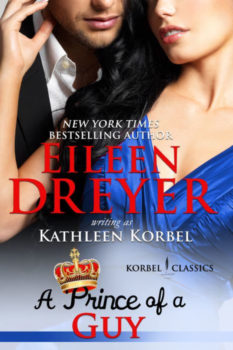 A Prince of a Guy

A Prince of a Guy
by Eileen Dreyer, Kathleen Korbel

When New Yorker Casey Phillips visits the tiny country of Moritania, she simply wants to see where her ancestors came from. Instead, she’s mistaken for a princess.

The real princess has been kidnapped, and Crown Prince Eric von Lieberhaven insists Casey—a dead ringer for the missing royal—step into the princess’s shoes until she can be freed.

As Casey upends royal tradition, Eric finds himself hoping the cheeky American never returns home. But can a secretary from Brooklyn really find happiness with a prince?