Renegades of the American Revolution #3

British Occupied Manhattan, 1777. With her witty comedies, American actress Jennifer Leighton has been packing the John Street Theater, but she longs to escape the provincial circuit for the glamour of the London stage. When the playwright General John Burgoyne visits the city, fresh from a recent success in the capitol, she seizes the opportunity to court his patronage. But her plan is foiled by British intelligence officer Severin Devere.

Severin’s mission is to keep the pleasure-loving general focused on the war effort…and away from pretty young actresses. But the tables are turned when Severin himself can’t resist Jennifer Leighton…

Months later, Jenny has abandoned her dreams of stage glory and begun writing seditious plays for the Rebels under the pen name “Cornelia,” ridiculing “Gentleman Johnny” Burgoyne and his army—and undermining the crown’s campaign to take Albany. By the time Severin meets up with Jenny once again, she is on a British hanging list, and Severin is ordered to find her—and deliver her to certain death. Soon, the two are launched on a desperate journey through the wilderness, toward a future shaped by the revolution—and their passion for each other… 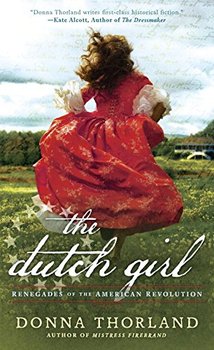 The Dutch Girl
Renegades of the American Revolution #4

The Turncoat
Renegades of the Revolution