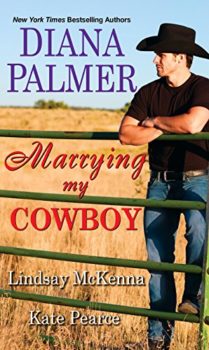 Marrying My Cowboy
by Diana Palmer

Take a walk down the aisle—western style—with these tales of unbridled love, from a trio of New York Times bestselling authors who know the way to a cowboy’s heart . . .

The Rancher’s Wedding by Diana Palmer

When a widowed Colorado rancher who’s in the red meets up with a screenwriter-turned-waitress dogged by scandal, they put their talents—and their hearts—together. But will front page news put a damper on the sparks flying between them?