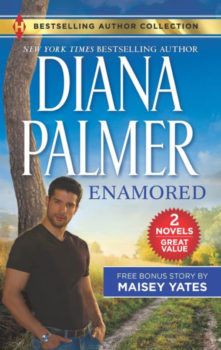 Diego Laremos has never forgotten the last night he spent with his wife, Melissa Sterling, five years ago. After a terrible misunderstanding, Melissa fled their home in tears. He hasn’t forgiven her for leaving, though he’s hated himself even more for driving her away. When Melissa comes back into his life again, he is given a second chance to prove how much he cares.

When Melissa left Diego, she took the secret of her unborn baby with her. Now that Diego is back, and taking care of her after an accident, Melissa realizes she made a terrible mistake. It’s time to come clean—about their son, and the fact that she never stopped loving Diego.

Enamored was originally published April 1988 in Silhouette Desire #420 in mass market paperback and reissued April 2014 in eBook by Harlequin.