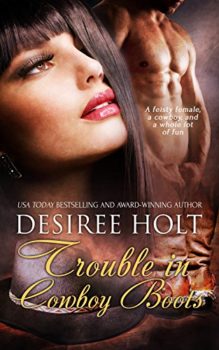 Take one feisty female and one burned-out cowboy, mix well and watch the flames ignite.

Stranded in Mesa Blanco, Texas, with no money and no prospects, Emily Proctor hires on as the cook at the Lazy Aces Ranch.

Originally published July 2010 in the Sequine, Saddles, and Spurs series in eBook by Ellora’s Cave Lawless.