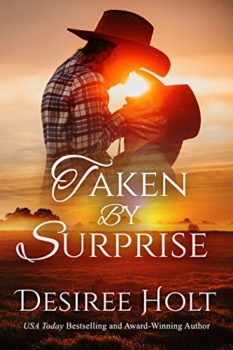 Taken By Surprise
by Desiree Holt

Jessie Coford had a plan: work hard, save money, open her own restaurant. She sacrificed her relationship with the man of her dreams to get it. Then, in the blink of an eye, she lost her job and her apartment and her life crashed around her. Until a letter taking her to Fort Mavis, Texas, and an unexpected windfall.

Jack Ward can’t get over his breakup with Jessie. Angry at her rejection and burned out by his job as a detective on the Houston PD, he abruptly quits and accepts a job as a sheriff’s deputy in—where else—Fort Mavis.

Whenever they are near each other, enough sparks fly to light up the night sky. But he can’t forgive her, and she’s too stubborn to take the first step. Then disaster rears its ugly head and Jack and Jessie are forced to take a hard look at their situation—and their love for each other.