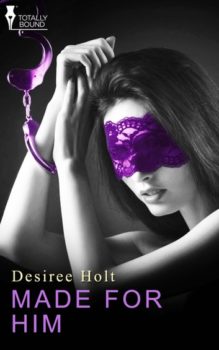 Made for Him
by Desiree Holt

She had one weekend to convince him she was made for him.

Micah Sheridan is a self-made billionaire who has the world at his fingertips. He can have any woman he wants but they all seem to leave him unfulfilled.

What he really wants is a woman who can submit to him completely in the bedroom but who is a strong person out in the world. An equal match for him.

Enter Teri Choate who heads an executive search agency. She's searching, too---for a man who can master her in bed yet allow her strong personality to flourish beyond the bedroom door.

She has one weekend to prove to him she can be the perfect submissive in the bedroom and an equal beyond the bedroom doors.

In short, a woman who is made for him.