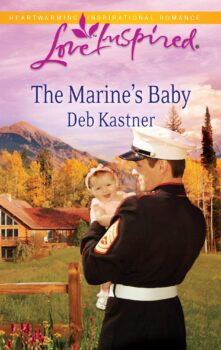 The Marine's Baby
by Deb Kastner

The U.S. Marine Corps made a man out of Nathan Morningway. But the orphaned baby girl left to him by his military buddy made him a father. A single father. With no training in diaper duty, let alone parenthood, Nathan heads home to Morningway Lodge---where he's not exactly warmly welcomed by his family. But day-care worker Jessica Sabin helps care for little Gracie and teaches him how to be a daddy. That seems to make Jessica happy. So why does she look so sad sometimes? Nathan's new mission: to find out---and make Jessica smile forever.