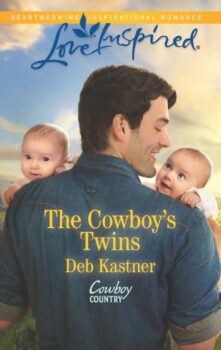 The Cowboy's Twins
by Deb Kastner

Rancher Jax McKenna's gotten used to being on his own. Then surprise twin babies---daughters he never knew existed---arrive on his doorstep, and his world goes topsy-turvy. Strong, silent Jax has a way with horses. Not little girls! So when Texas newcomer Faith Duggan steps up to help, he's overwhelmed with gratitude. Faith's following her dream of buying a mustang rescue sanctuary. And she needs Jax, too. But after a tragic accident changed his life forever, Jax isn't used to letting anyone in. Could Faith be the exception...and the partner he's always searched for?