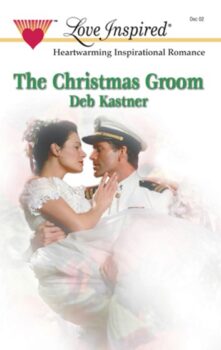 The Christmas Groom
by Deb Kastner

Footloose and fancy free is the motto Colin Brockman yearns to live by. After years spent in the navy, Colin gets his chance to let loose while studying to be a navy chaplain. No haircuts, no ironing, no watches, no rules! Colin is determined to lighten up and go with the flow. But when he meets beautiful grad student Holly in psychology class, Colin starts to rethink his plans....

Holly McCade never expected to be charmed by the rumpled, scruffy student she's dubbed "Mr. Late." With a wink and a grin, Colin sweeps Holly off her feet. But Holly's ready to settle down and start a family, while Colin has only just begun to sow his wild oats. Will Mr. Late turn out to be Mr. Right? Will Holly get a groom for Christmas?