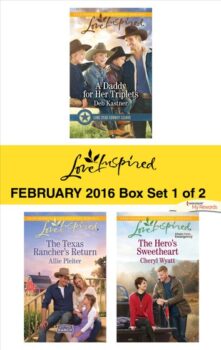 Clint Daniels is a mountain man who needs nothing and no one. But helping widow Olivia Barlow and her six-year-old triplets with her small horse farm could be his chance to become a husband and father.

Rancher Gunner Buckton suspects single mom Brooke Calder is at Blue Thorn Ranch to persuade him into signing away rights to the creek on his land. Can he learn to trust the pretty widow and see they?re meant to be together?

Returning home to care for his ill father and their family diner, military medic Jack Sullenberger clashes with spirited waitress Olivia Abbott. As they work together to save the restaurant, they'll discover they have more at stake...their happily-ever-after.