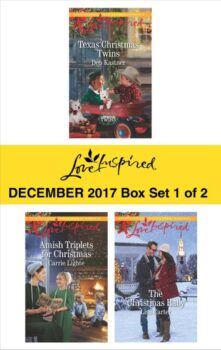 All Miranda Morgan wants for Christmas is to be a good mom to the twins she's been named guardian of---but their brooding cowboy godfather Simon West isn't sure she's ready. Can they learn to trust in each other and become a real family for the holidays?

Spinster schoolteacher Hannah Lantz had given up on having a husband and children---until Sawyer Plank asks her to be nanny to his triplets. Now she's falling for the handsome widower and putting a future together on her Christmas wish list.

Pregnant widow Anna Reyes returns to her seaside town for the holidays and reunites with her first love, Ryan Savage. Ryan hopes to go back to the career he once sacrificed, but as they work together with three at-risk kids, he's realizing his friendship with Anna is turning into a wish for forever.