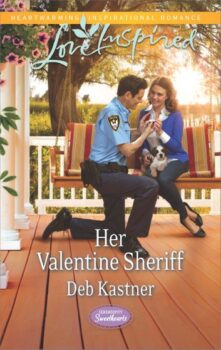 Her Valentine Sheriff
by Deb Kastner

Cupid To The Rescue

Rugged and tough deputy sheriff Eli Bishop isn't scared of anything. Except dogs. When he's assigned a K-9 partner, he thinks things can't get any worse. Then he learns who'll be training him. Local vet Mary Travis is sweet as sugar...but she's also Eli's ex-fiancée's sister. Revealing his humiliating phobia to her is not an option. Neither is developing feelings for Mary---who's built her career around the dogs Eli fears. When a terrible storm hits their town, Mary and Eli must find the courage to work together and save lives---and fall in love.