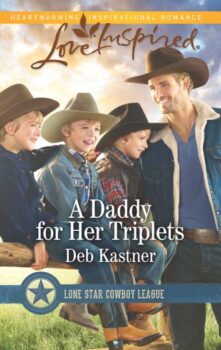 A Daddy for Her Triplets

A Daddy for Her Triplets
by Deb Kastner

Clint Daniels knows he is nobody's sweetheart. The rugged mountain guide has lived most of his life alone, and with his heartbreaking past, he can't imagine a domestic future with anyone. Especially not a warm and graceful widow like Olivia Barlow. But when her three towheaded little boys approach him at the Lone Star Cowboy League's annual Valentine's dance, he finds it impossible to turn them away. Clint isn't prepared to be a father, but these boys draw out his paternal side. And somehow, vulnerable Olivia and her children begin to make the cowboy suspect their wary hearts might actually be a perfect match...