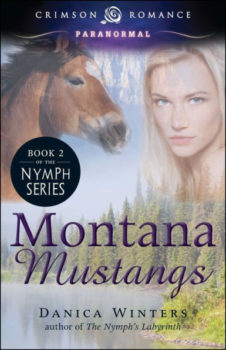 A nymph: a woman with the ability to seduce at will, shift to protect, but cursed with the fate to have the man she falls in love with die a tragic death. As one of these illfated nymphs, Aura Montgarten has spent her lifetime drifting from one place to another hiding from love. Until she meets Dane.

When a body washes up on the shore of a rural Montana lake, police officer Dane Burke is faced with the task of finding the killer even if it means he will be forced to put his life and heart at risk by working with a drifter. As the truth of Aura’s Mustangshifting nymph ways are revealed, Dane learns exactly the amount of danger he and Aura are in, but can’t force himself to leave a case unsolved when the truth is just outside his grasp.

When the killer decides he needs to take another victim Dane Aura must choose between their forbidden love and her immortal life. Can there be life without love or is death her only choice?