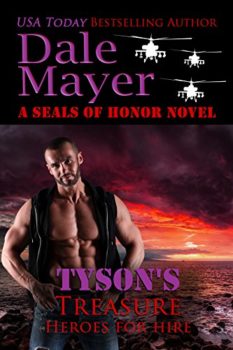 A SEALs of Honor Novel: Heroes for Hire Book 11

Welcome to TYSON’S TREASURE, book 11 in Heroes for Hire, reconnecting readers with the unforgettable men from SEALs of Honor in a new series of action-packed, page turning romantic suspense that fans have come to expect from USA TODAY Bestselling author Dale Mayer.

Tyson lost his wife and child several years ago, and he knows it’s time to move on… So when his wife’s best friend barrels into his new life and he finds out she’s in trouble — as in serious stalker trouble — he steps up because he owes it to his late wife. Only he quickly finds out he wants to be at Kai’s side — any way he can.

Kai has wanted Tyson for so damn long, but from the first moment her best friend saw him first, the two were like a lock and key. When Kai sets her eyes on him for the first time in years while doing a demonstration for a new training program her company developed, she realizes her feelings haven’t changed.

But her life has changed, and she has a huge issue she doesn’t want anyone to know about. After all, she’s got a badass skill set… She can handle a stalker on her own… right?

Or maybe not. As the two delve deeper into Kai’s troubles, they find out things are much more complicated than they seem — and much more deadly.