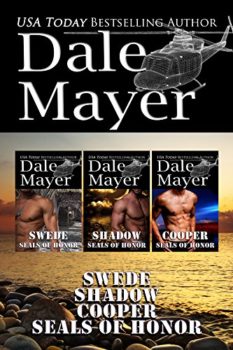 His fellow SEALs have lost their hearts one by one while murder gets in the way of the promise of finding his own true love. Swede is on the lookout for his perfect mate, but if it’ll happen is secondary to when considering that he’s deep in the wilds of Mexico hunting a rebel training camp. When a group of civilians wanders into the middle of his operation, Swede is stunned to learn a woman he long ago decided was completely wrong for him is in the very place his team is setting up an extremely dangerous mission.

Eva loves animals, especially those in need. When a friend requests her help transferring a herd of horses from Mexico to new homes, she jumps at the opportunity…and lands herself in trouble. Swede is an old “frenemy” and he’s determined to extricate her to safety before the rebels show up. Even as he works to shelter her, she struggles to protect her heart from him a second time. The rebels have plans of their own—one that isn’t likely to involve a happily-ever-after in Swede and Eva’s futures.

Given a life that’s been little more than an uphill battle, it’s no wonder Shadow is so damn good at dealing with whatever’s the hardest, the most hazardous and hellish.

The life of a SEAL is the one place where Shadow is most comfortable existing. He’s certain of what he’s capable of achieving, knows when to act and exactly how to do what needs to be done. But when he sets off on a mission to rescue Arianna and her family, his world goes from precise, controlled action to blown-to-smithereens chaos. Who is this woman and why does she rattle him the way no one else ever has?

Arianna has been plunged into a foreign state of affairs that includes kidnapping, beatings, threats…and Navy SEALs. The only good thing about this nightmare is the dark, dangerous savior watching over them. Shadow doesn’t seem to have a clue what to do with her. Although she has a pretty good idea where she’d like to see their relationship go, will they ever get that chance?
She’s been marked for murder, and it’s up to Shadow to save her—or risk losing what he hadn’t even realized he wanted, yet now can’t live without…

A highly-skilled practitioner of medicine saved Cooper’s life and sanity while that same woman steals his heart.

Being a SEAL is at the core of Cooper’s being, but he isn’t just doing his duty when the doctor who miraculously restored him to life is kidnapped. He’s the first in line to volunteer in her rescue.

Dr. Sasha Childs has devoted herself to helping others. Finding out her husband is helping himself to her best friend solidifies her sense of single-minded devotion to practicing medicine. Disillusioned about love, she volunteers her skills to a Syrian refugee camp crying out for medical aid. She’s completely unaware of the war brewing around her until she’s caught in the middle of it.

Cooper had his hands full rescuing Sasha from foreign hands the first time. After the war comes home, keeping her safe a second time becomes damn near impossible. Blessed with getting his life handed back to him, he discovered he needs a second miracle before the woman he’s fallen for becomes little more than a casualty of war.

This is a Christmas Novella continuing the story between Mason and Tesla!

Mason loves his life with Tesla, but living together isn’t enough. He wants more. He wants it all. He wants forever.

All set to make this a memorable Christmas for the two of them, he calls her at home and hears her cry out as she fights off an attacker. Racing to her rescue, he finds her missing — again.

Determined to put the horrific memories behind her, Tesla is looking forward to a bright and happy future. But someone nursing a grudge has decided it’s payback time.

Their lives change in a flash as Mason races to save Tesla before they lose their future — and each other.