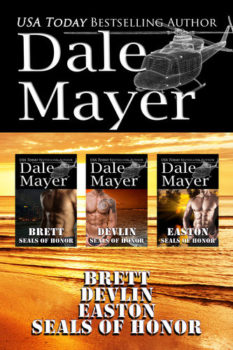 Rescuing hostages on a yacht is a fairly normal mission for Brett, one of the elite SEALs, but having one of those hostages be an ex-girlfriend and her kids — well that changes everything.

Ceci had walked away from Brett and into another relationship as a way to heal. Only to end up as a widow raising two kids. She planned to stay single and secure, avoid all the heartbreak that relationships bring until she comes face to face with her rescuer…and realizes she’s been fooling herself for years.

As part of a group helping to training Iraq soldiers, Devin is doing additional training on how to use the latest drones. But when a murder is committed on the base and suspicion is thrown on the drone’s designer, he can’t stop himself from helping her. When they return stateside, another employee in the same company is murdered. Once again suspicion falls on the designer. And as tension climbs, Devin wonders who will be next…

Bristol didn’t want to take her latest drone models to Iraq, but she was behind schedule and her bosses were pushing.

Then disaster strikes, and she’s the one everyone blames. She loses her research and her best friend, and now she’s determined to find out who did this… no matter how dangerous it is.

The killer isn’t done. He got what he wanted but there’s more that he needs… and he’ll kill to get it. After all, it wouldn’t be the first time…

The killer isn’t done. He got what he wanted but there’s more that he needs… and he’ll kill to get it. After all, it wouldn’t be the first time…

Trips to Canada’s wilderness for joint military training are something Easton always enjoys. But meeting the photographer contracted to take pictures of the base and trainees for new marketing materials adds a whole new twist to the trip.

A twist Easton quickly realizes has a dark undertone.

Summer knows she gets lost in her art to the point she’s been called ditzy, forgetful and many other less pleasant names. But her passionate nature has an outlet, and she loves traveling for her work. It also means she doesn’t always take care of herself as she should.

When she’s stalked, then attacked, Easton soon realizes Summer has stepped into something dangerous and needs his help to stay alive.

Especially when the violence escalates…and he comes close to losing the one woman he can’t seem to stay away from.