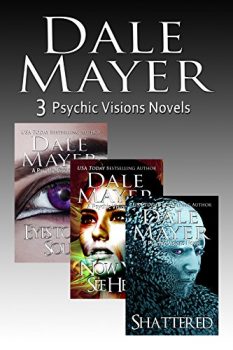 This is a collection of three books of the best selling Psychic Vision series bundled together into one volume. This is a paranormal romantic suspense/thriller series.

Eyes to the Soul (originally published January 2015 in eBook)

Just because a person can see — doesn’t mean they should look.

Celina Wilton was technically blind, a state she wasn’t very happy about. In her case, the alternative was worse. So she’d learn to adapt, one way or another.

Stefan Kronos has wanted to get close to Celina for a long time, but she has walls that he’s been forced to go around in some unusual ways. When a case he’s been called to consult on puts her square in his radar, he has to watch his step…and hers.

Unraveling the threads twisting between them and a killer like none Stefan had seen before, means Celina has to trust him enough to let him inside her barriers.

That’s when Stefan realizes he’s not the only with eyes into her soul.

Now You See Her… (originally published November 2015 in eBook)

Energy. The life force of good … and evil
And sometimes evil is stronger.

Tia spent years imprisoned in a 'special’ program. When she finally escaped, she ran as far away as she could. But it wouldn’t leave her alone.

Only one person can help her. Stefan. But when she contacts him for help, she gets more than she bargained for. Six weeks later, she awakens from a coma to find more problems than ever — and she’s still being hunted.

Dean, moonlighting as a guard at the hospital, finds himself in an impossible situation. His belief system is stretched out of control by someone whom he can’t forget … and can’t believe. Until he has no choice.

With everything on the line, Tia and Dean must work together to solve the problem that has somehow — in a very unique way — entwined them both.

Some events are life shattering…

Caught in a gilded cage for most of her life, Hannah can’t stop trying to escape. There’s something wrong with her that the doctors can’t figure it out, but she…’d rather be free and die then stay trapped… forever.

Caught once again, Trevor others her a unique way out. Should she trust him? And what if he finds out the truth — will he still be on her side?

Trevor knew he much to make up for in his life. And he worked at it every day of his life. But when the opportunity to rescue an incredibly talented waif, he hadn’t realize how much would be asked of him.

Time is against them. And that’s when they find out that not all enemies are outside in the world.

Sometimes they are inside… we just don’t know it…