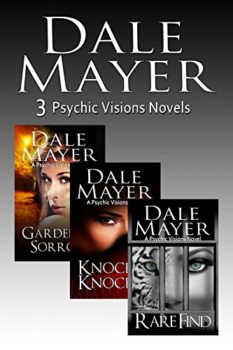 This Psychic Vision Set includes the following 3 books in
the series:

GARDEN OF SORROW (originally published December
2012 in eBook and trade paperback)
Alexis Gordon has spent the last year trying to get over the
loss of her sister. Then she goes to work on a normal
day…and reality as she knows it…disappears.

Detective Kevin Sutherland, armed with his own psychic
abilities, recognizes her gift and calls in his friend
Stefan Kronos, a psychic artist and law enforcement
consultant, to help her develop her skills. But Kevin has
never seen anything like this case — a killer with a
personal vendetta to stop Alexis from finding out more about
him…and his long dead victims.

The killer can be stopped. He must be stopped. But
he’s planning on surviving…even after death.

Wealthy and beautiful Shay Lassiter runs a prestigious
foundation, but her connections and resources were worthless
when her fianc tried to murder her. Now, she’s
guarding her heart and using her knack for reading
people’s intentions — both good and evil —
to guide her. But when the foundation’s clients start
dying, she must turn to the new man in her life…one
who’s giving her mixed signals.

Computer specialist and ex-cop Roman Chandler has a secret.
It involves Shay and could ruin the fragile relationship
he’s building with her. Though he can’t tell her
the truth, he needs to convince her to trust him. He fears
that whoever is behind this is about to turn his vengeance
on Shay…

And vengeance can be deadly.

RARE FIND (originally published April 2014 in
eBook and trade paperback)
When people need help or are injured, they Acall out for
their friends and family. When an animal needs help or is
injured, it calls out for…anyone…that can help
them…

One person hears them…

Tabitha is determined to bury her aching heart in the
service of her animals at Exotic Landscape. Until
she’s yanked out of her cozy retreat to help someone
in need…and she gets more than she bargained for.

Detective Ronin Chandler understands secrets. He’s got
a few of his own. But when the woman he loves gets into
trouble — the kind that stretches even his belief
system — he struggles to understand…and to
help…before he loses her. Maybe forever.

As the danger escalates, Tabitha and Ronin need to find out
who they can trust…and who they can’t…and
who wants them dead…before it’s too late.