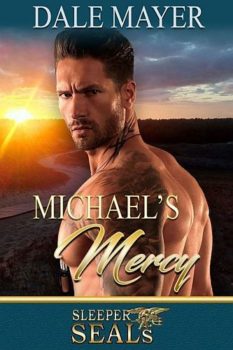 It’s been a year since hardened Navy SEAL Michael Stanton walked away from his career. He
never thought to go back, but then his former commander calls with the news that an old friend
was murdered while undercover — and he needs Michael’s help.

Mercy got the job as a maid that her sister had last held — just before she disappeared. With the police lacking leads and interest, Mercy decides it’s up to her to find out what happened. Inside the huge home, she meets Michael and becomes immediately suspicious … and immediately attracted.

When they collide in the worst way possible, she realizes he’s not who he seems either.

Can they each find the truth about their objectives and about themselves? Or will the terrorist get wind of the traitors in his midst and take care of them before they can take care of him?

Each story in this multi-author branded series is a standalone novel and the series can be read in any order.

Welcome to Michael’s Mercy, book 10 in Heroes for Hire (and Sleeper SEALs #3) reconnecting readers with the unforgettable men from SEALs of Honor in a new series of action packed, page turning romantic suspense that fans have come to expect from USA TODAY Bestselling author Dale Mayer. This book is part of the continuity series SLEEPER SEALS.