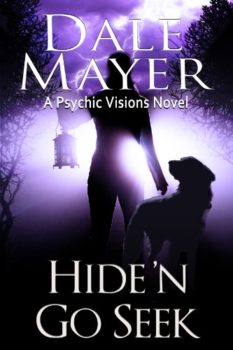 A twisted game of Hide’n Go Seek forces an unlikely alliance between a no-nonsense FBI agent and a search-and-rescue worker.

Celebrated search-and-rescue worker Kali Jordon has hidden her psychic abilities by crediting her canine partner Shiloh with the recoveries. But Kali knows the grim truth. The Sight that she inherited from her grandmother allows her to trace violent energy unerringly to victims of murder. No one knows her secret until a twisted killer challenges her to a deadly game of Hide’n Go Seek that threatens those closest to her.

Now she must rely on FBI Special Agent Grant Summers, a man who has sworn to protect her, even as he suspects there’s more to Kali and Shiloh than meets the eye. As the killer draws a tighter and tighter circle around Kali, she and Grant find there’s no place to hide from themselves.

Are her visions the key to finding the latest victim alive or will this twisted game of Hide’n Go Seek cost her...everything?