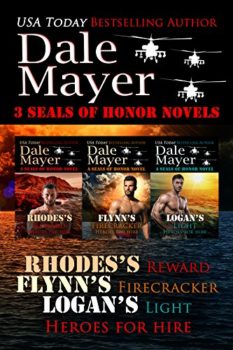 Second chances do happen… Even amid evil…

Rhodes knew Sienna years ago. When she’d been young and gawky, more elbow and carrot hair than style, but she’d had something special even then. Now she’s all grown. But she’s a trouble magnet, and even at the compound it finds her…

Sienna had a super-sized crush on her brother’s best friend years ago. Now he’s hunky and even hotter than she could have imagined. Only she’s new and doesn’t want to jeopardize her position. When asked to help out on a job, she agrees…and triggers a sequence of disastrous events no one could foresee.

But someone will stop at nothing to silence everyone involved, especially the two of them…

Some jobs are more pleasant than others…
Flynn agrees to do a security job for Levi as a trial run for more work. Looking after Anna and her animal shelter is a breeze. Trouble free. Until he leaves…

Having Flynn around was both good and bad. To have the help at the shelter was huge, but they drew sparks just being around each other. She tells herself she’s relieved when he’s gone but when a dead man shows up, she'd do anything to have him back.

Logan heads to Boston on an intel mission. His investigation plunges him and his partner into the deep dark world of human trafficking.

The last thing Alina remembers is having coffee at the cafe in the hospital where she works. She awakes tied up in a strange apartment. Her world as she knew it gone…possibly forever.

Now they’re on the run together. Time is against them. There’s a quota to be made, and the traffickers aren’t going to let Alina go if they can help it.

Unfortunately, she’s not the only victim. The hunt is on…for the traffickers and their other victims…before it’s too late.