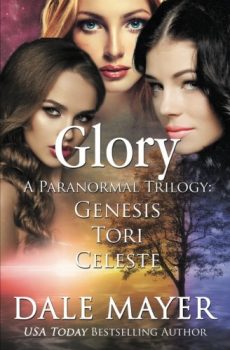 This collection is the first 3 books in the Glory series.

Genesis and her sisters are the last of her maternal line, the last of the stargazers — except she is a dropout in the energy worker talent department. Gentle, non-assuming Genesis Chandler is supposed to be protecting the woods, as is her nature — she’s an energy worker — but since Granny’s death and her sisters leaving town, she’s lost sight of much in her life. While she was living with blinders on, someone else took advantage. Connor has been called in to investigate the sacred forest. Something odd is happening to the reserve, and it’s affecting the town’s energy source. That also means it’s connected to the sacred pools. He’s got energy problems himself and needs Genesis to get to the bottom of this problem. Genesis has no love for Connor. His fault. He loved her and left her, not realizing he’d left the best part of himself behind — his heart. Can they work together to find out who is destroying their energy reserve — a resource that’s key to the life of all who live on Glory? Their survival depends on it.

Hurt and betrayed, Tori has gone into hiding. Anything to give her time to heal from losing the love of her life. Devon came looking for her… for all the wrong reasons. He needs her help to save a large band of locals caught behind a weird energy pattern. As an energy worker, she can’t turn her back on those in need. She will help him but only if he disappears from her life forever. He agrees but has no intention of honoring his promise. She’s finally let him back into her life — he has no intention of screwing up a second time. Tori isn’t big on forgiveness but she is big on Devon. Only the weird energy pattern was a problem — a big problem — and the start of something sinister. Before she can work out what’s going on, the stakes go up, and she realizes there might not be a future for either of them.

This is Matt and Celeste’s story. Being last sucked. And so did going home less than triumphant. Celeste is injured only this time it’s her leg and not her pride. There’s no room for the latter when she’s being stalked. And now someone is out to destroy her and her sisters… Matt has been waiting for Celeste to return — to him. She was a strong energy worker and trying to track her down would be futile. And pointless. She’d be found only if she wanted to be. Considering she’d stayed away as long as she had, he worried that maybe she wasn’t planning on coming back — ever. But Glory is heating up and life for Celeste and her sisters is coming up to crunch time. They need her back. And she’s come back — on her terms. The three sisters must unite to fight the secret enemy in their midst and to preserve their way of life. That means Celeste must make peace with herself and Matt — before it’s too late.