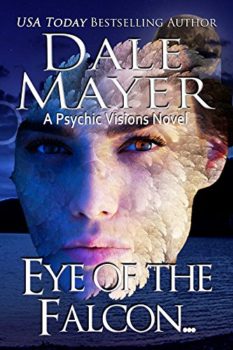 Eye of the Falcon

Eye of the Falcon
by Dale Mayer

As a young girl, Issa, bonded with her pet falcon was the lookout for her father’s smuggling operation in Ireland. After everything blew up one night and her father and brothers were killed, her mother brought her to America to start over.

Immigrating was hard, but eventually she grew up and pursued a career in environmental sciences and continued to follow her passion for falconry. But she doesn’t find the same special bond with another falcon. Until one fateful day when her world explodes again…

Eagle, a former military pilot, has retired to his small ranch outside of Denver, Colorado where he runs a rescue center for raptors in need. One falcon is acting irrationally. Eagle’s only recourse is to euthanize him, but the falcon rips free. Although injured so badly he shouldn’t be able to fly, the falcon disappears into the skies.