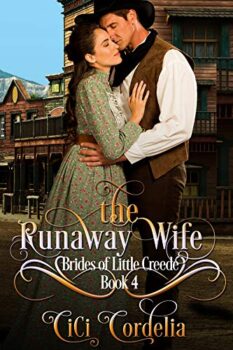 The Runaway Wife
by CiCi Cordelia

Samuel “Sam” Singleton has set aside his unsavory past, as a riverboat gambler and sometimes hired gun, to take on employment as security for Knight Gleason’s Gambling Galleria in Little Creede. Sam and Knight go back a ways, and Sam figures he owes Knight for some valuable mentorship. Then he meets a stowaway thief in the Galleria kitchen, and it changes the direction of his life.

Isadora “Izzy” McDougall is on the run from a dangerous family situation. On the road for days, hungry and exhausted, she takes shelter in a desperate bid to find food. Instead, Sam finds her.

Sam’s never been the nurturing type, but Izzy’s sweetness and innocent bravery touches his heart. He finds himself willing to protect her from her scheming family at any cost, even if it means tying himself down with a wife.

Robert Blackwood comes to Magnolia Sanders’ rescue when she’s lost in a snowstorm. Taking shelter in an abandoned cabin, he fights his rising desire for the innocent beauty, while trying to keep them alive.