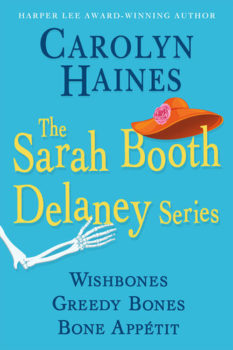 Carolyn Haines consistently charms readers with her award-winning series starring Sarah Booth Delaney, a southern belle and private investigator from Zinnia, Louisiana, who can be as down home or as high-class as she needs to be to catch a killer. Here together for the first time in a fabulous eBook bundle are three of Haines’s popular Sarah Booth novels:

Southern gal Sarah Booth Delaney packs up her hound dog and her P.I. business and sets off for Hollywood to take a shot at stardom. But it’s not long before rivalries flare, mysterious accidents occur, and the leading lady finds herself in some steamy tabloids without turning up in a single frame of film.

Sarah Booth is in Hollywood when she hears that her best friend’s husband is on his deathbed back home in Mississippi-and he’s not the only one. With the whole town in crisis, Sarah Booth drops everything to stop the outbreak and save the only place she’s ever called home.

Sarah Booth is recovering from a personal tragedy at a posh spa, where there’s a beauty contest/cook-off occurring. Sarah Booth finds watching the backbiting great fun-until the heated competition boils over, the top contender is poisoned, and the prime suspect hires Sarah Booth to clear her name.