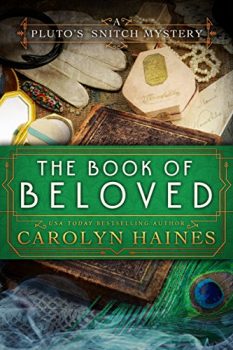 The Book of Beloved

The Book of Beloved
by Carolyn Haines

As a young woman widowed by World War I, Raissa James is no stranger to ghosts. But when an invitation arrives from Caoin House, her uncle’s estate in Mobile, Alabama, she’s finally ready to cast off the shadows of her past. And what better way to do so than with a grand party in her honor? An aspiring authoress, Raissa’s eager to soak up more of life—and immerse herself in the dark history that haunts the estate.

But the revelries come to an abrupt end when one of her uncle’s guests takes a deadly plunge. And when a ghost from the property’s past, a Confederate soldier, reveals himself to Raissa, she’s more determined than ever to get to the heart of the mysterious deaths that plague Caoin House. Enlisting the help of Reginald Proctor, a self-proclaimed medium, she holds a séance to shed light on old secrets. But she discovers that some secrets, even those long dead, still have a startling hold on the living…