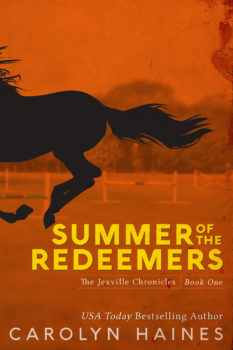 Summer of the Redeemers

Summer of the Redeemers
by Carolyn Haines

Along with the sweltering heat of the Mississippi Pine Barrens, the summer of 1963 brings intruders to Kali Oka Road: The Blood of the Redeemer churchers, members of a secretive religious sect, and Nadine Andrews, a single woman of marrying age more interested in her horses than starting a family.

Both threaten the predictable sameness of this rural, tightly knit community. And both provide irresistible temptation for 13-year-old Bekkah Rich, who is willing to risk hell fire in her efforts to spy on the newcomers.

But then her best friend's baby sister disappears, surrounding Bekkah in a web of kidnapping and murder. Suddenly, summertime antics become deadly serious, and those who were once a curiosity are now tainted with evil.