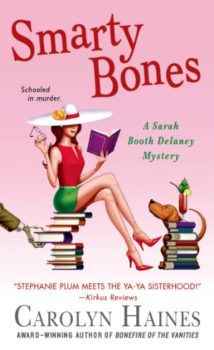 Too much knowledge can be deadly for P.I. Sarah Booth Delaney in her latest undertaking in Smarty Bones, the thirteenth novel in Carolyn Haines’s award-winning mystery series.

Professor Olive Twist has come to Zinnia, Mississippi, to study a mysterious grave wherein lies the Lady in Red, an anonymous but perfectly preserved and stunningly beautiful body. Since the discovery of the grave in 1969, Mississippi schoolchildren have been making up colorful stories about the Lady in Red’s identity and past, but no one has come any closer to learning the truth. Now, Olive claims she can not only identify the corpse, she can also prove the woman’s scandalous role in the nation’s history. Olive takes it a step too far, though, when she starts connecting elite Zinnia families with the same scandal.

Originally published May 2013 in hardcover.