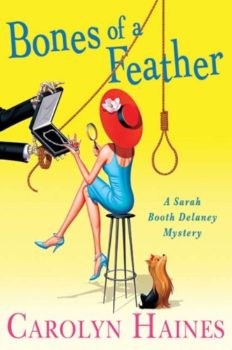 Bones of a Feather

Bones of a Feather
by Carolyn Haines

When PI Sarah Booth Delaney and her partner and best friend, Tinkie, take on Monica and Eleanor Levert as clients, they don't have much hope of solving the case. The wealthy heiresses of Briarcliff in Natchez, Mississippi, claim that a family necklace worth four million dollars has been stolen, and they think that they can hurry the insurance payout if a reputable PI investigates. Sarah Booth has her doubts, and not just about the payout. All of the evidence suggests that the sisters might be committing fraud.

But when they have just started scratching the surface on the sordid past of the Levert family and the blood money that all of their wealth was founded upon, Monica goes missing. The police suspect that the heiresses are playing more games, and Eleanor isn't doing anything to make them think any different.

But how can she? If she says or does anything besides pass on the insurance money to the kidnappers, they'll kill Monica.

With a family history that runs deep and dark and a twisting plot where no one is exactly what they seem, Sarah Booth and Tinkie are the Levert sisters' best and only hope in Bones of a Feather, the latest in Carolyn Haines sparkling Southern mystery series.

Originally published June 2011 in hardcover and also published March 2012 in mass market paperback which is out of print.