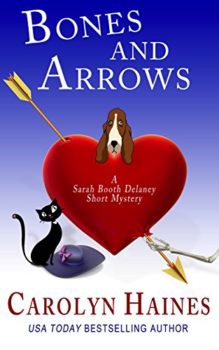 Bones and Arrows
by Carolyn Haines

In Zinnia a criminal Cupid turns into a case for Delaney Detective Agency.

Gods, goddesses, slaves, centurions—all are gathered at Tinkie Richmond’s elegant home to celebrate the holiday for love. The costume Valentine’s party is the hot ticket in the Mississippi Delta. But Tinkie’s title of Queen Bee of Delta Society becomes jeopardized when her Valentine’s guests are all robbed.

There’s nothing for it but that Tinkie and Sarah Booth Delaney find out what happened to the very handsome Cupid (who failed to appear at the party) and where the short, hairy, Pan-like Cupid (who crashed the party) came from. Certainly not Central Casting.

As Sarah Booth and Tinkie begin to unravel the secrets of the God of Love, they find themselves in danger and with a lot more at stake than some stolen goods.