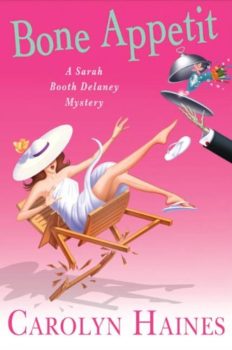 In the midst of a cook-off at a posh spa, southern PI Sarah Booth Delaney gets embroiled in a juicy murder in the latest mystery from Carolyn Haines

For many years Jitty, Dahlia House’s resident ghost, has dreamed that Sarah Booth Delaney would have a child to inherit the family’s ancestral home. Sarah Booth has always had reservations about being a parent. There was her work as an actress and PI, taking care of the house, not to mention finding the right man. But when Jitty’s dream finally looks like it’s going to come true, Sarah Booth is crushed when it doesn’t. Depressed, unable to act or investigate, Sarah Booth finally allows her best friend to whisk her away for a luxurious weekend vacation at a special spa and cooking school.

The pampering and food go a long way toward making her feel like her old self, but there’s another welcome distraction---there’s a beauty contest/cook-off going on to find the spa’s next spokesperson, and watching the drama really takes her mind off of her woes. Sarah finds the backbiting to be great fun---until the heated competition boils over, the top contender is poisoned, and the prime suspect hires Sarah Booth to clear her name.

Between swimsuit competitions and soufflés, Sarah Booth Delaney and her best friend and partner, Tinkie, must find out which of the ambitious young ladies is to blame in Bone Appetit, the latest in Carolyn Haines’s delightfully Southern cozy mystery series.

Originally published June 2010 in hardcover and May 2011 in mass market paperback.