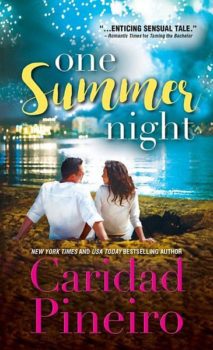 At the Shore Book 1

One Summer Night
by Caridad Pineiro

Maggie Sinclair has tried everything to save her family's business. Her options are dwindling, and she needs someone who can turn things around---fast. Problem is, the only person who can help her is trouble with a capital T. The Sinclair and Pierce families have been feuding for nearly 30 years, but that hasn't stopped Jax Pierce from noticing Maggie. And he likes what he sees---a lot. But getting involved would mean risking his family, his inheritance, and above all, his heart. Can Maggie and Jax keep their simmering attraction at bay---or will mixing business and pleasure bring nothing but heartache?