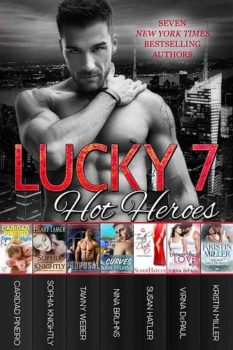 Seven New York Times & USA Today Bestselling Authors bring you seven contemporary romance novellas, starring seven hot heroes who will make you melt. Whether you love a second chance romance, an office playboy, or a former-fling staying in the cabin next door, this boxed set has a fall-in-love romance for you.

An act of compassion leads to unexpected pleasure . . . Thrown together, Marine Lieutenant Trevor Mason and Maggie Sullivan can’t ignore the sexual heat between them. As they satisfy one set of needs, another slowly develops as passion breathes life into other emotions. Will Trevor and Maggie’s one last night together possibly lead to many other nights in the future?

Also includes Heart Tamer by Sophia Knightly, A SEAL’S Proposal by Tawny Weber, Dangerous Curves by Nina Bruhns, Truth or Date by Susan Hatler, Because You Love Me by Virna DePaul, and The Bad Boy Meets His Match by Kristin Miller