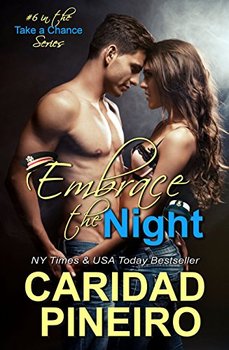 Embrace the Night
by Caridad Pineiro

If you like stories with sexy military heroes who are willing to risk it all for the happily-ever-after, you'll love the books in the Take a Chance Military Romance series.

For the first time in nearly two years he felt normal again . . .

Army brat Zack Taylor had spent his early life going from one place to the next, losing his home and friends with every move until he decided it was just easier to be alone. Despite that, Zack has no hesitation in following in his father's footsteps and going the ROTC route for college. He has no hesitation in going back for his wounded team members after they are attacked during a mission. His dedication to his men nearly cost him his life when a nearby explosion wounds him and shears off part of his leg. For the last two years, Zack has been rebuilding his life and finding out that being a loner is no fun. Especially not when he's caught the eye of sexy Samantha Whittaker whose gaze is filled with passion, laughter, and the shadows of pain.

She is fighting hard to ignore the obvious invitation in his determined gaze . . .

Lieutenant Commander Samantha Whittaker is just not interested in getting involved. At least not until she can deal with the wounds left behind by her stint as a prisoner of war. Physically and mentally abused, it has taken her years to find some stability and independence in her life. Giving in to the much younger and enticing Army vet will challenge that hard won freedom. But Zack's persistence and caring are wearing her down until she considers that maybe it's time to embrace all that he can offer, even if it's only for one night of passion.