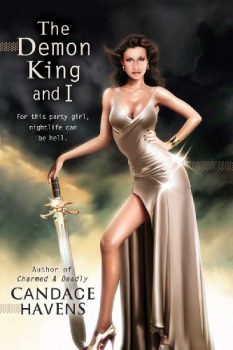 The Demon King and I

The Demon King and I
by Candace Havens

The Caruthers sisters are heiresses with privilege, wealth, beauty, and brains. But these party girls have something extra. As the Guardian Keys, possessors of an ancient family secret, they hold the fate of the world in their hands.

Gillian, the eldest, is a sensation in the art world— this world, that is. In her other world she's the Assassin, a knockout who snuffs out dimension-jumpers who foul up her personal space. She never expected to join forces with one. But when a plague of murderous demons plunges the earth in darkness, she has no choice but to get a little help from a being who knows his stuff.