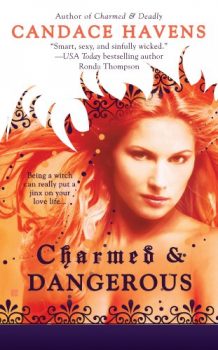 When Bronwyn turned twenty she took the oath to protect, and for the last five years she’s kept that promise, working as a kind of one-witch secret service to the British Prime Minister. Her arsenal includes a combination of potions, spells, explosions, mind-reading tricks, and general butt-kicking skills. But Bronwyn has a soft side, too—especially when it comes to Dr. Sam, the favorite physician of her new hometown, Sweet, Texas. He’s smart, funny, adorable, everything she could want in a man. Except he’s also a warlock—a big no-no in Bronwyn’s book of dating. Being a witch is definitely getting in the way of her sex life. If zapping evil jerks is easy, why is finding a boyfriend so hard?