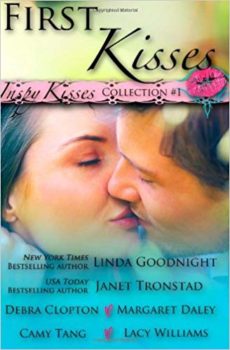 A new anthology from some of your favorite bestselling sweet romance authors. Enjoy this collection of love stories with the theme of FIRST KISSES. Available in both eBook and trade paperback.

The Rambler's Bride by Linda Goodnight New York Times Bestselling Author
In 1870's Kansas, Widow Esther North will do most anything to save her land from her powerful cousin and the coming railroad-even kiss a stranger! The kissing cowboy, Jericho North is bent on revenge from his brother's widow, and the will hidden in his pocket is all he needs to make it happen. But he hadn't reckoned on a baby...and neither he nor Esther had reckoned on love.

Lovebirds at the Heartbreak Cafe by Janet Tronstad
USA Today and Publisher's Weekly Bestselling Author, Janet Tronstad, pens a brand-new Retro Café Sweet Romance starring a 1950's truck driver (Buddy) and a waitress (Penny) who both have enough trouble without everyone in Webster's Crossing thinking they are falling in love.

Her Mule Hollow Cowboy by Debra Clopton
Rescuing a beautiful cowgirl from being trampled has professional bull rider, Cliff Masterson, dreaming of romance, home, hearth and that first kiss...but Maddie Rose has had enough people in her life leave and she's not willing to risk her heart on a rambling cowboy---Sparks fly when these two are near. Can the Matchmakin' Posse of Mule Hollow help this couple find their happily ever after?

Deadly Hunt by Margaret Daley
All bodyguard Tess Miller wants is a vacation. But when a wounded stranger stumbles into her isolated cabin in the Arizona mountains, Tess becomes his lifeline. When Shane Burkhart opens his eyes, all he can focus on is his guardian angel leaning over him. And in the days to come he will need a guardian angel while being hunted by someone who wants him dead.

Necessary Proof by Camy Tang
Alex Villa became a Christian in prison, and because of his efforts to help stop a gang producing meth in Sonoma, he has been set up for the death of a cop. Can computer expert Jane Lawton find the evidence that will prove his innocence before the gang eliminates them both?

Kissed by a Cowboy by Lacy Williams
Former shy-girl Haley Carston is back in Redbud Trails, Oklahoma, to care for her dying aunt. She didn't count on cowboy Maddox Michaels, her high school crush and the man who might just bring her dreams of marriage and family back to life...

Other Books by Camy Tang 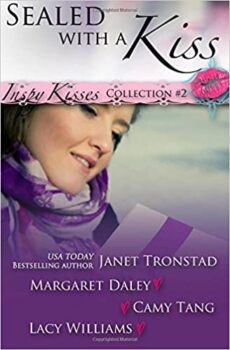 Camy Tang writes romance with a kick of wasabi. She grew up in Hawaii and now lives in San Jose, California, with her engineer husband and rambunctious mutt, Snickers. She graduated from Stanford University and worked as a biologist researcher for 9 years, but now she writes full-time. She is a staff worker for her church youth group, and she leads one of the worship teams for Sunday service.

On her blog, she ponders knitting, spinning wool, dogs, running, the Never Ending Diet, and other frivolous things. Visit her website to read free short stories and subscribe to her quarterly newsletter.