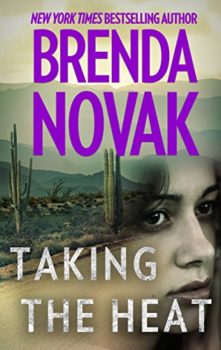 Taking the Heat
by Brenda Novak

The small town of Florence, Arizona, is known for one thing—its prison. Gabrielle Hadley is in Florence for personal reasons, though; she’s seeking the mother who abandoned her more than two decades ago. In order to support herself and her two-year-old daughter, Gabrielle is working as a prison guard—just about the only job available in this bleak desert town.

Randall Tucker is a prisoner at Florence, convicted of murdering his wife. He has one goal: to survive until he can prove his innocence—and reclaim his seven-year-old son, Landon, now living in foster care.

In the prison’s atmosphere of tension and corruption, Gabrielle discovers that Randall Tucker is far from the murderer he’s said to be. When he escapes during a prison transfer, she follows him into the unforgiving desert. To protect her job, her own integrity—or him? But the guard becomes the prisoner’s captive…and more. It’s a relationship that’s not supposed to exist, and yet it might save them both.

Other Books by Brenda Novak

Before We Were Strangers

On a Snowy Christmas

No Place Like Home
A Small Town Romance Collection

The Secret Sister & The Secrets She Kept
Fairham Island

Blood In, Blood Out

It was a shocking experience that jump-started Brenda Novak’s career as a bestselling author—she caught her day-care provider drugging her children with cough syrup to get them to sleep all day. That was when Brenda decided she needed to quit her job as a loan officer and help make a living from home. “When I first got the idea to become a novelist, it took me five years to teach myself the craft and finish my first book,” Brenda says. But she sold that book, and the rest is history. Her novels have made the New York Times and USA Today bestseller lists and won many awards, including five Rita nominations, the Book Buyer’s Best, the Book Seller’s Best and the National Reader’s Choice Award. Brenda and her husband, Ted, live in Sacramento and are proud parents of five children—three girls and two boys. When she’s not spending time with her family or writing, Brenda is usually raising funds for diabetes research (her youngest son has this disease). So far, Brenda has raised $2.6 million. Please visit http://www.brendanovakforthecure.org to see how you can help.