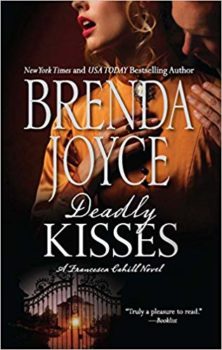 "I did not kill anyone, Francesca. And the fact that you wish to destroy evidence suggests that you think me capable of murder."

Called to the home of her fiancé's former mistress late one night, Francesca finds her curiosity piqued. But upon arrival, she is shocked to find Daisy Jones's bloodied body...and even more devastated when the evidence points to one suspect---her fiancé, Calder.

Francesca cannot---will not---believe that Calder is capable of such an act. Still, she is unable to shake her instinctive sense that Calder is lying about something. The police are far less inclined to believe his innocence, and Calder is arrested for Daisy's murder. But Francesca's heart is not easily swayed...until a life-altering secret is exposed that could destroy their future together.

Other Books by Brenda Joyce

The Masters of Time Series Books 4-5

A Sword Upon the Rose

A Rose in the Storm

Brenda Joyce is the bestselling author of fourty-four novels and five novellas. She has won many awards, and her debut novel, Innocent Fire, won a Best Western Romance award. She has also won the highly coveted Best Historical Romance award for Splendor and Two Lifetime Achievement Awards from Romantic Times BOOKreviews. There are over 14 million copies of her novels in print and she is published in over a dozen foreign countries.

A native New Yorker, she now lives in southern Arizona with her son, dogs, and her Arabian and half-Arabian reining horses. Brenda divides her time between her twin passions—writing powerful love stories and competing with her horses at regional and national levels. For more information about Brenda and her upcoming novels, please visit her.