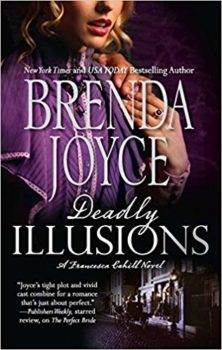 Irrepressible heiress and intrepid sleuth Francesca Cahill moves from her own glittering world of Fifth Avenue to the teeming underbelly of society, a place of pride, passions...and sometimes deadly perversion.

Despite the misgivings of her fiancé, Calder Hart, Francesca cannot turn away from a threat that is terrorizing the tenement neighborhood of Lower Manhattan. A madman has attacked three women, but while the first two victims survived, the third is found dead. All the victims are impoverished but beautiful Irishwomen---andFrancesca fears that her dear friends Maggie Kennedy and Gwen O'Neil could be next.

Soon she is working with her former love, police commissioner Rick Bragg---Calder's half brother and worst rival. But even as Calder's jealous passions leave his relationship with Francesca teetering on the brink, Francesca is frantically on the killer's trail, certain the Slasher will strike again, afraid she will be too late....

Other Books by Brenda Joyce

The Masters of Time Series Books 4-5

A Sword Upon the Rose

A Rose in the Storm

Brenda Joyce is the bestselling author of fourty-four novels and five novellas. She has won many awards, and her debut novel, Innocent Fire, won a Best Western Romance award. She has also won the highly coveted Best Historical Romance award for Splendor and Two Lifetime Achievement Awards from Romantic Times BOOKreviews. There are over 14 million copies of her novels in print and she is published in over a dozen foreign countries.

A native New Yorker, she now lives in southern Arizona with her son, dogs, and her Arabian and half-Arabian reining horses. Brenda divides her time between her twin passions—writing powerful love stories and competing with her horses at regional and national levels. For more information about Brenda and her upcoming novels, please visit her.