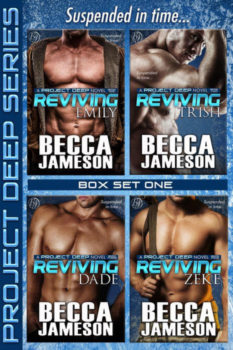 Project DEEP (Disease & Epidemic Eradication & Prevention) is a steamy military/government series that takes place in a government bunker in Colorado where the world’s most renowned scientists work to cure and prevent diseases. Unfortunately, ten years ago an accident in the bunker infected all twenty-one medical professionals with a rare form of fatal anemia. They were unable to find a cure in time, so they were cryonically preserved in the bunker. Follow the lives of several of these men and women as they are reanimated a decade later and go on to find love and happiness.

After a decade of cryonic preservation, he brings her back to life. Now he must protect her against an unknown enemy.

After ten years, life is giving them a second chance. Can they rekindle the sparks after a decade of preservation?

Life gives him a second chance, but it turns out he needs a third. Her job is to keep him safe and alive in their race against the clock.

He may have been reanimated, but it hasn’t improved his surly outlook on life. She’d rather not be paired with an angry coworker who also lights a spark in her.