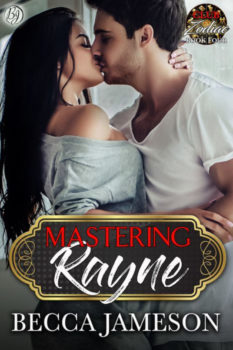 For Rayne, guarding deep family secrets is a way of life. It’s ingrained. It prevents her from ever getting close to anyone.

Colin is building a new life in Denver. He has a club to open, a personal training business to grow, and an abused sister to rescue.

Rayne and Colin have known each other for years, but they’ve never scened together. Until now… A chance meeting in a club can change everything.

There’s just one problem. Colin’s ex-girlfriend made him extremely leery of women who are hiding something. Secrets raise huge red flags.

They click. Rayne knows it. Colin knows it. But the secrets get in the way. Without trust, there is no foundation.

Mastering Rayne is the fourth book in the Club Zodiac series. It features Rayne, a character fans will remember from Training Sasha. The hero is Master Colin, a character from another local club, Breeze. Master Colin also made an appearance in Dark Nightmares, which released in November of 2018 in the Dark Falls series.