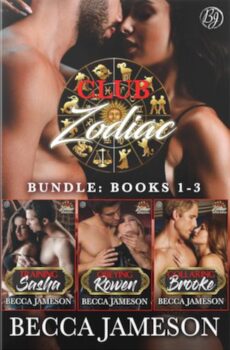 Welcome to Club Zodiac. This continually growing series follows the lives of the owners and patrons of Club Zodiac, which has locations in Miami and Denver. These first three books take place at the Miami location as the three owners of that club find and fall in love with the women of their dreams.

Sasha Easton has had her eye on Lincoln Walsh—the owner of Club Zodiac—for five years. Unfortunately, he does nothing but scowl at her and reject her every shy advance.

She’s not right for him…

Lincoln doesn’t have a choice but to discourage Sasha because the truth is the two of them are not compatible, no matter how much he might want her in his bed.

She’s not as innocent as he thinks…

Determined to get Lincoln to see her as more than his business partner’s little sister, Sasha delivers an ultimatum—let her join Club Zodiac or she’ll find what she’s looking for elsewhere.

Can he help her and let her go?

Watching the only woman he’s ever wanted with another man is more than Lincoln can bear, so he finds himself caving. After all, he’s confident if he pushes her hard enough, he can protect her from his way of life and himself from admitting the truth about his feelings.

She knows it. But it’s easier for Faith to pretend she’s someone she’s not than allow herself to feel again. To love again.

Rowen can see right through Faith’s false persona. But approaching her is the last thing he wants. He’s not interested in her type, and wealthy women make him cringe.

She’s drawn to him…

When the opportunity presents itself, Rowen won’t turn down the chance to prove what he already knows about Faith. She isn’t as conflicted as she believes. She’s perfect for him.

But is it enough?

Faith has skeletons. Rowen has concerns. They both have a lot to learn about trust and second chances.

Her entire world is falling apart…

Faced with losing her job and her apartment, Brooke is in crisis mode when she inadvertently stumbles into a world she didn’t know existed.

He’s not the right man for her…

Carter’s been watching the gorgeous redhead. She won’t meet his gaze. Her secrets will probably terrify him. And her desires run in a direction that makes him uneasy.

She needs the release only a he can provide…

Her haunting past has led her to release her stress through unconventional means. She is leery about Carter’s suggestion that she can get the same results in more sensual ways.

He has to let her go…

No matter how badly he would like to keep her, she must face her past head-on and find herself before she can truly belong to him.