For as long as he could remember, he wanted her...

Raised by a single mother, Adam Collins resolved to take no chances with a girl’s future—or his own. That’s why, as hard as it was, he resisted everything he felt for Marissa Brooks. Then one night a reckless challenge left a fellow student dead and changed both their lives forever. As penance, Adam took the boy’s place in the Marines, where he could disappear into discipline and duty, and left Marissa behind to struggle with her dreams.

Twelve years later, Adam is back in Walkers Ford to serve as the best man in his friend’s wedding. The years haven’t diminished the electric connection he has with Marissa. But Adam’s mistake continues to haunt him, and Marissa is stumbling under the weight of her family’s legacy. Together they wrestle with demons and dreams, but if there’s any hope for a future together Adam has to not only find a way to forgive himself, but also ask others for forgiveness—especially from the woman whose heart he broke.

Other Books by Anne Calhoun 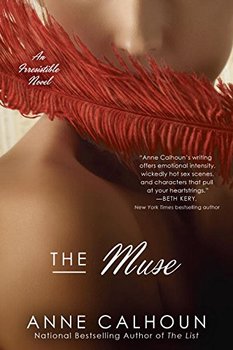 The Muse
An Irresistible Novel #4

After doing time at Fortune 500 companies on both coasts, Anne landed in a flyover state, where she traded business casual for yoga pants and decided to write down all the lively story ideas that got her through years of monotonous corporate meetings. Her first book, LIBERATING LACEY won the EPIC Award for Best Contemporary Erotic Romance. Her story WHAT SHE NEEDS was chosen for Smart Bitch Sarah’s Sizzling Book Club. Anne holds a BA in History and English, and an MA in American Studies from Columbia University. When she’s not writing her hobbies include reading, knitting, and yoga. She lives in the Midwest with her family and singlehandedly supports her local Starbucks.